To protect yourself against any violation of the Universal Law of Freewill, please check the followings before you continue any further.

[Freewill: You have the right of your own opinion, conviction, belief or faith, and you also have the right not to be influenced by anything of not your liking]

If you feel the above statements are absurd and non-sensical, it is advisable for you not to proceed beyond this point. Thank you for visiting the Scientific Spiritual Page.

If you feel some resonance and can relate to it, please go through this summary page and find out if you could also resonate to what is written hereunder.

[Please proceed at your own pace and let it sink in. It is a very vast & complex subject and written in a very condensed form to limit space. Sometimes you may need a little more than just an open mind.]

“A full glass, though open, can not receive fresh water.
It has to be emptied first.”.

The Ultimate Unification Theory – The Gate

In July 1992, The Ultimate Unification Theory was publicly introduced by the author for the first time at the Fifth International Conference on Thinking, in Townsville – Australia. The conference was organised by James Cook University and was attended by around 1100 people.

While our prominent physicists are still struggling to formulate their “Theory of Everything”, the words “Ultimate Unification” sounds very provocative and a bit far fetched. Unfortunately, there is no other words more suitable to describe the subject. The Ultimate Unification Theory simply describes the basic fundamental axioms of our cosmos, for its physical, mental as well as spiritual manifestations.

Scientifically speaking, The Ultimate Unification Theory is a hypothesis, which uses a new frame of reference, which is the condition at the speed of light. At this condition, there is no such thing as “matter”, but an inseparable web of vibrating energy “patterns” in which no one component has reality independently from the entirety. The whole cosmos is an Absolute One Unity, which is “everything” and at the same time “nothing” (void).
– The Law of One.

Leaving our “atomistic” paradigm behind, and taking a new “pattern-istic” view, we realised that the Cosmos “polarized” itself, and the inter-relation between the polarities resulted in what we know as our world.
– The Law of Polarisation.

The study of inter-relating patterns instead of particles, and eventual development of mathematic formulas describing patterns and their inter-relationship, will bring the scientific break-through in the 21st century. “Patterns” apply both for physical and non-physical entities, from particles (energy pattern) up to our mental / thought patterns and beyond. And the basic law is what we know as the Principle of Resonance and Induction.
– The Law of Interactions.

Every scientific theory needs verification either by experiments or by the use of mathematics. Prior to verification, every theory is considered as a hypothesis. Unfortunately, the Ultimate Unification Theory is beyond contemporary mathematics. We need to further develop our mathematics, so that one day we may be able to verify it mathematically.

(Faraday needed Maxwell to formulate his discovery into mathematical form of Electrodynamics.)

On the other hand, the Ultimate Unification Theory can be verified by daily life experience without any complex arrangement of sophisticated equipment for experimentation. The only thing we need to do is to review our experience from a different point of view using the new frame of reference.

The main purpose of putting the Ultimate Unification Theory on the Internet, is to give a new impetus in our scientific endeavour, a new perspective on our concept of reality, which may result in a new life philosophy, at the same time, it is also intended to get public verification through feedbacks and comments.

Maybe one day a mathematician could help on formulating it and to prove it using the mathematical language.

The Ultimate Unification Theory is a Trinity comprising of :

Symbolised by a circle, a “zero”, the void, the absolute boundless everything and nothing, the ultimate unity.

Symbolised by the center point of the circle, which then become a horizontal line dividing the circle into two halfs, the polarities.

The U.U.T and the Mystical Symbology

Understanding The Ultimate Unification Theory, we might realise that:

The more natural reality is the reality at the speed of light or the reality of light, whereas our physical reality in this time-space continuum is only an apparent reality, which is temporary.

The Absolute is beyond the reality of light, where time stops – therefore patterns cease to be cyclic, periodic or time dependent, and space shrinks; hence separateness ceases to exist.
Time-space and the whole Cosmos become Singularity,
The Absolute, Infinite Oneness.

There is no such thing as “objectivity”.
The whole Universe is to us as what it is, only because we are as what we are.
Time-Space and the whole Universe as we perceive it, has no objective reality independently from us.
It is our common illusion. (Maya)

Every “I” is the same “I”, which is the Cosmic “I”.
The only difference is the Subject pattern held as point of reference to experience other patterns.
Due to Subject – Object polarisation, the subject pattern identifies itself as “I am”, having the impression of being separated from the rest of the Cosmos, which is it’s illusion.

Continuing your own journey

The Ultimate Unification Theory is symbolized by a cross within a circle. In our stage of consciousness we don’t see the circle. It can only be achieved through mystical experience known as “AT-ONE-MENT” (at one with the whole Cosmos).

Reality consists of Subject pattern, who experiences other patterns which resonate to it as the Object. They are basically in-separable. Without the Subject, there will be no Object and vice versa.

Different Subject will experience different Object. We think that our physical world is an objective world, only because the patterns of our physical senses are all the same.

Beyond physical, due to our differences in upbringing, life experience and belief systems, we rarely have the same memory and thought pattern. Therefore each of us perceives life differently. Everyone of us is unique in perceiving our own subjective reality.

The subjective world built from subjective impressions, is the reality within every person as a unique subject (Esoteric). The objective world is the outside common world we share (Exoteric).

The Law of Polarisation is The Law of Freewill, which is divine in nature. To take a totally opposite polarity or to resonate to a certain thought pattern is exercising Freewill. What counts is the experience.

based on facts and figures
(proof is always needed)

concept of right vs. wrong

subject dependent
(no proof is needed)

every subject is unique

based on own experience

knowing instead of believing

Next: The Ultimate Unification Theory 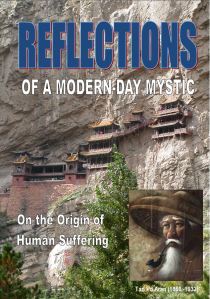 Buy my book at Amazon.

It’s a spiritual journey of multiple lifetimes/incarnations seeking to understand the cosmos and the root cause of human sufferings.

For those who seek to understand the Cosmos